Hello and Welcome to the website of Phantom Wood Rottweilers.  I hope you enjoy meeting my Rottweiler family and reading about their accomplishments.   My dogs are very near and dear to my heart and I'm so proud of them.  You will also meet some of the many people who own and love their own Phantom Wood Rottweilers.  I'm so thankful to them for giving the dogs I have bred wonderful homes and fulfilling lives by working, training, showing (and loving) their Rottweilers.   Thanks for visiting - Hope you stay awhile!    Karla Niessing

Click on any picture to enlarge throughout this site.   This site is copyrighted.  Please do not reproduce any pictures or text from this site without express written permission of the owner.   Thank you.

My new Home Page features the multi-championed dogs of Phantom Wood.   Working on this page brought back a lot of memories and some tears.   Many of these dogs have passed on, but their legacy lives on in their offspring and in the hearts of their owners.  All these dogs have earned at least 2 Championships, one in conformation and one or more in a working venue.  They are all "Beautiful Working Dogs"  - how blessed I have been to share my life with them.

THE PHANTOM WOOD HALL OF FAME AND PARADE OF WORKING CHAMPIONS 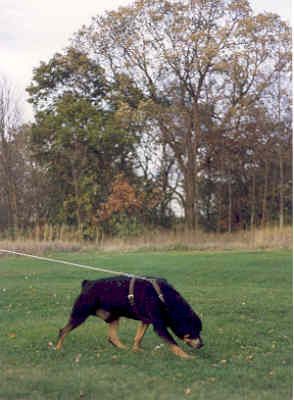 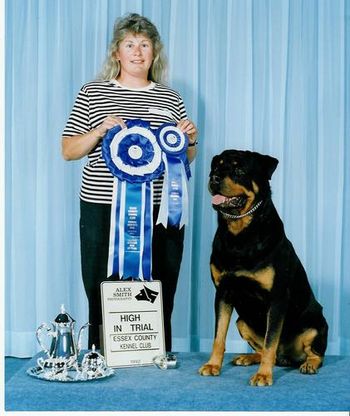 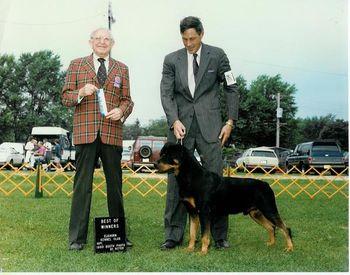 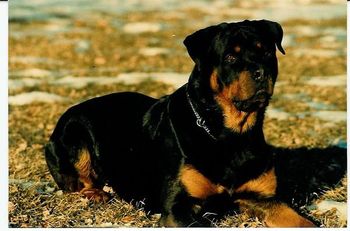 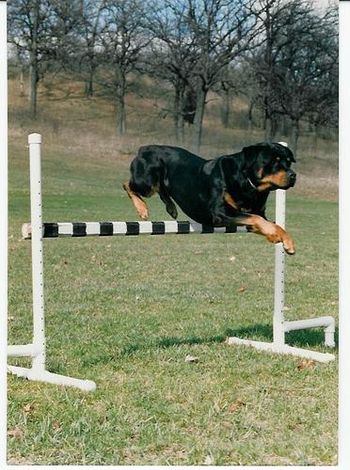 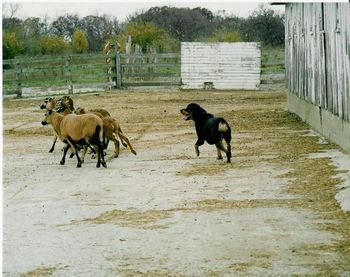 Share photo gallery
Jem was my foundation sire and is in the pedigree of every dog I have bred.   He made me laugh with his high-energy antics and his "life's a party" attitude.  He was an incredible tracking dog and sired many offspring who went on to their TDs, TDXs and CTs.   Jem also passed on his great working drive, his sons and daughters have gone on to excel in all venues.   Jem is an American Rottweiler Club Gold Sire and is in the Medallion Rottweiler Club Hall of Fame.   He earned two Dog World Awards with his high obedience scores and was consistently in the ARC Rankings.   Jem had a wonderful temperament and could be trusted with children and all dogs, large and small.  He was handsome, smart, versatile and brave - everything you would want a Rottweiler to be.  I was so lucky to have him in my life.
Jem's sire and dam:         (CH Birchill's Warwick CDX TDX Sch1 x CH Von Brader's Elsa) 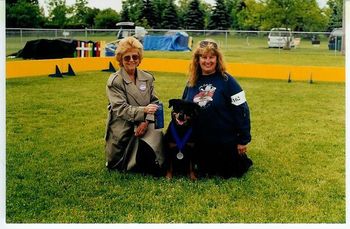 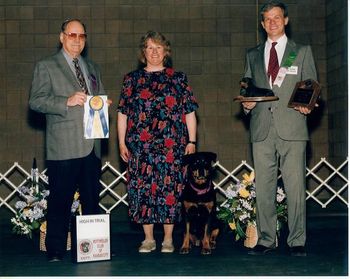 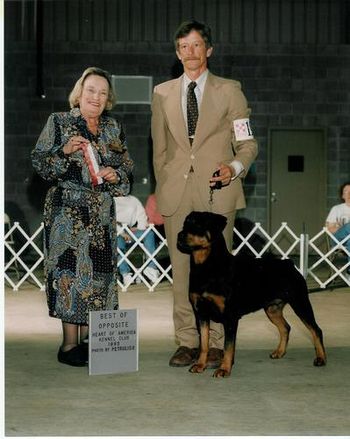 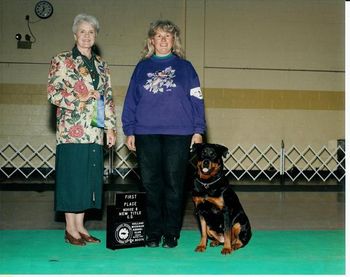 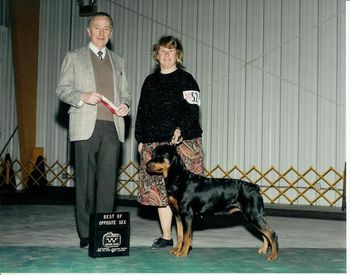 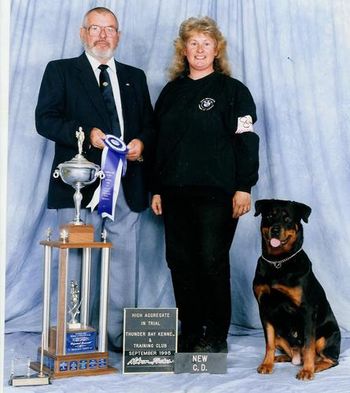 Share photo gallery
Carly was my bright shining star.  She was a high-energy girl, always wanting to interact with me in work or play.  Carly loved obedience and was consistently ranked in the American Rottweiler Club obedience rankings, many times in the first or second spot.  Carly was the first breed Champion to also earn the Obedience Trial Championship, finishing her OTCH with a 198 1/2 and a High in Trial.  She had multiple High in Trials and never failed to entertain the crowds with her happy attitude and occasional antics.
Carly was owner-handled to her breed Championship and earned her majors under respected breeder-judges Joan Klem and Susan Rademacher.  Carly never quit - the day she finished her CH, it was a hot day in Tennessee and the breed ring was in the middle of an asphalt parking lot.  I knew I could rely on Carly's great heart and her love of showing - she did her final go-around with that far-reaching gait  of hers,  flying around the ring effortlessly.   I'll never forget the moment the judge pointed to her.
Carly was in the Medallion Rottweiler Club Hall of Fame, she was an ARC Gold Dam (one litter) and because she was one of the Top 3 obedience Rottweilers in the country, she participated in the National Obedience Invitational 2 years in a row, winning the Working Group the first year.  As a Veteran, she won many Veteran and Veteran Sweeps classes, wowing the crowd with her high energy and beautiful, flowing gait even after 11 years of age.   "Once in a lifetime" dog is not a phrase I would use lightly, since all my dogs shine with their own light, but in this case I think it applies.    My little girl Carly will always be in my heart.
(CH Goldeiche Ara von Brader CD x CH Queeny vom Fusse der Eifel CD) 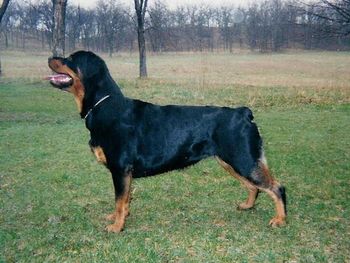 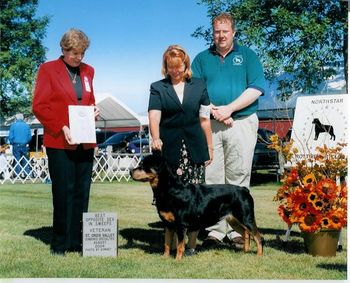 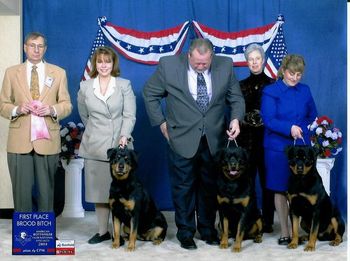 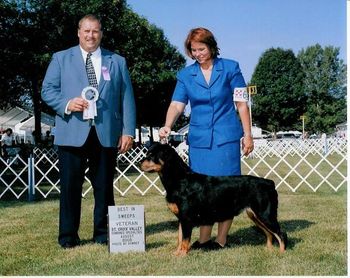 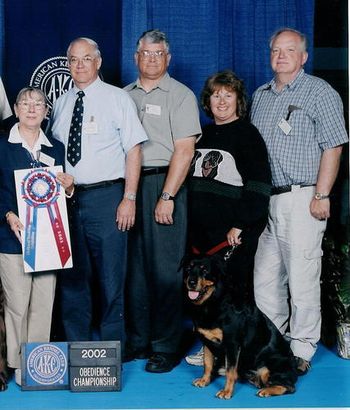 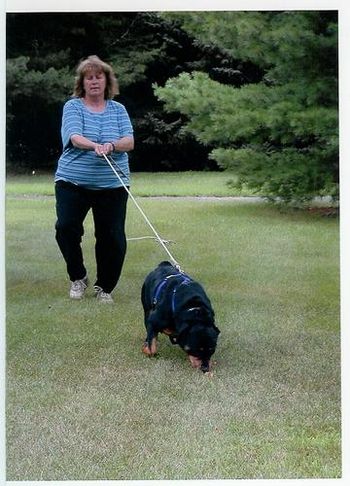 Share photo gallery
Blaise was bold, strong and confident.  She was extremely smart and liked to be in charge.  Maybe that's why she excelled in tracking - Blaise was one of the best tracking dogs I ever owned.   She earned her TD, TDX and her VST easily, earning the coveted "Champion Tracker" title.  Blaise participated in the National Tracking Invitational, one of the few select dogs in the country invited to this honored event.    Blaise had one litter and earned the American Rottweiler Club Silver Dam Award for the Champions and working-titled offspring she produced.  She won the Brood Bitch class at the ARC National, with her sons, Baron and Dieter.    Blaise was also in the Medallion Rottweiler Club Hall of Fame.   As a Veteran, she won many Veteran and Veteran Sweeps classes,  she moved like a dream with one of the best rears I've seen.   Outside of the show ring,   I remember how brave Blaise was, she reminded me so much of her sire, my Jem.   I'm lucky to still have her son, Baron (CH Phantom Wood Der Baron CD TDX RN) in my life.  He reminds me so much of his mother, always ready to work or play.    Blaise always made her prescence known, she lit up a room with her energy.   I miss her smiling face, bouncing around with a toy in her mouth.    She was one of the great ones.
(Jem x CH Jay-San's Reell Gespiel CD TD)